The N in Trap Neuter Return

Bart is now neutered, has his anti-flea treatment, has his distemper and rabies shots, and he even got a nail trim, some antibiotics, and anti-pain injection. And a clipped ear.

Now he has to spend another night in the trap while the anesthesia wears off, and I can release him tomorrow back into the convent yard.

There were a lot of steps in this process! I was lucky he was so cooperative with the trap—I imagined I would catch one of the other cats (already TNRed), a skunk, any number of raccoons, or maybe a opossum. Fortunately, Bart decided to go along with me.

I have a friend who is involved with the county animal league, and she set me up with the feral vets up near the GW Bridge. While the price is right, I had to rent a car. Fortunately, I had some points so the cost was only $11, gas, and some tolls.

I learned a bit while doing this—I didn't make Bart comfy and overnight, he let me know he wasn't comfy with some plaintive yowls. I threw in an old shirt and he cozied up on that.

He wouldn't really eat or drink, but I put some chicken baby food on the dry cat food, and then he gobbled it up.

At one point, when Bart was whimpering, Jay came by to check out the situation. I had Bart's trap under the stoop, behind the iron gate. Jay couldn't get in, but he tripped the motion detector. I took a look outside the window, and there was Jay staring at me with the most accusatory glare.

I hope both Jay and Bart forgive me. 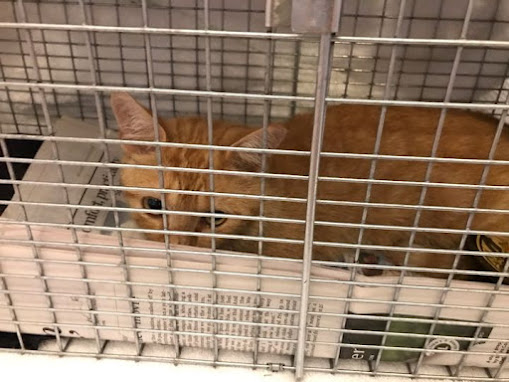