Nearly a year ago, I bought a ticket from Newark to Los Angeles for January 2. I always fly back right after New Year's, then I don't make any trips East until late April.

But this time around, January 2 turned out to be the busiest travel day of the pandemic thus far.

So I waited, and checked seating charts. Should I fly to Burbank? That way I would only be in a Lyft home for ten minutes. But the last (and only pandemic) time I flew in the little plane on the connecting flight from San Francisco to Burbank, it was small and packed and intimidating. The benefit of flying to LAX is I can fly direct on a Dreamliner, a newish plane with top-of-the-line air filtration. But the down side of LAX is getting from the airport to Burbank. I can go in a ride share with one driver but that means taking the shuttle bus to the ride share lot, take the Flyaway to Van Nuys or Union Station and then switch to a brief ride in a ride share, or I guess I could walk but that might take...let's see...7 hours. And I don't have the right shoes. I'm not sure I even OWN the right shoes for that, but I kind of like the idea of trying it one day. Who says you can't walk to LAX?

Other people: That's not actually what we meant, we meant walk in from, you know, In-n-Out Burger. I booked the Dreamliner for Saturday, January 9, then I compulsively checked the seating charts until it became clear the plane was too crowded. I switched to January 10. By flying on the first flight of the day, I would be pretty sure of gaming the upgrades to get bumped up into Polaris Class with its little cubicle walls. (My United status for 2020 was carried over to 2021 since pandemic.)

Do little cubicle walls help? I truly do not know. It seems to me, though, that if I'm going to spring for points for an upgrade, there is no better time than the time of pandemic.

I got a 6:30 a.m. taxi to Newark—I've learned not to rely on ride share promptness at the crack of dawn on Sundays, and the taxis always show up a little early. It's about a 20-minute ride up Communipaw in the shadow of the Pulaski Skyway, and as we drove, I wondered about the efficacy of masks in closed spaces.

I've been getting a lot more paranoid by doomscrolling, reading about all the hotspots and statistics. And I know too many people who went to the store in a mask, and somehow came home with the 'rona. Which I'm calling it the 'rona, because the Jersey City Coptic Egyptian taxi driver this morning used that slang. Actually, I don't know that he's Coptic. It's just that everyone else in this taxi company always is, so why not. I didn't ask.

An aside: This is the same taxi company where the driver taking me to the airport back in 2004 said "Where are you going?" I said "Antarctica," and he asked "Are you from there?"

The Egyptian taxi guy dropped me off at Terminal C. "It hasn't been this crowded since the 'rona," he mused. I guess he didn't get sent to the airport on January 2, but he was not far off.

The check-in area was somewhat changed, with all the international flights upstairs now, so a lot more people wandering around that level. I went through TSA Precheck, still wondering about people who got the 'rona at the store, and picked up my morning latte just past security. I headed to the front of the secret United restaurant (big secret, same damn food in the back as in the front of the place, near as I can tell), and I ate breakfast, reasoning it was better to unmask and eat there than on the plane (breakfast still comes with your ticket in Polaris class). Of course, it's risky either way, but at least I'd only have a few unmasked people nearby.

And that's how I learned Saison in Terminal C now has brioche egg sandwiches with Sriracha sauce. It's not Scram JC or Eggslut, but this was a nice surprise. If I'm getting the 'rona for eating breakfast, at least it wasn't a shitty plane meal. When I flew back in May, the planes were empty. The airports were ghost towns. It was weird but easy and comforting. Every trip has been a little more crowded than the last, people less apprehensive. This time, no one seemed to care at all about social distancing, and while most people were masked up, there were also plenty wandering around with their noses sticking out.

I tried to keep my distance due to my heightened paranoia, and boarded last. I'd checked a bag so didn't have to worry about overhead space, plus Polaris Class means I had dedicated luggage space anyway.

I slept most of the way, and finally woke up, paid for the wifi, and doomscrolled some more. The 'rona. The frenzied mob. The terrible stories coming out about Wednesday.

On arrival in LA, I saw a sign for a walking passage to the ride share lot, which solved my problem of what's the best way home. And the walking path is the same as the one I take on crowded nights when I have to get off the Flyaway at Terminal 1 and cut across the airport to Terminal 7. Plus, it was good to walk a bit after being on the plane for 5 hours, especially in beautiful 70 degree weather. (Did I mention I like winter, but after a few months, it overstays its welcome? Happy to be back.)

I hailed the Lyft from my phone once I got to the pick-up area, and two minutes later, was in a Prius with Kim, who kept the windows rolled down.

Absolutely not. I am thrilled to have the outside air blowing past me in one of the most dire 'rona parts of the country. I had been petrified of this part of the journey, but the outside air made it relaxing, and I was home in 40 minutes. I have a big pile of mail, my plants are healthy thanks to my neighbors Jillian and Scott, and the sun is shining through my condo's big sliding glass doors. Eventually, I'll send for an Instacart grocery order and maybe one day, I'll unpack. But for now, I'm under ten-day mandatory quarantine, so I'll sit and wait, and wonder if flying was a risk worth taking, and I know the answer is the same as for all risks--it depends how this ends up.

But remember how I left town right after National Bundt Day?

At least I have enough frozen Bundt cake here to last for a month. 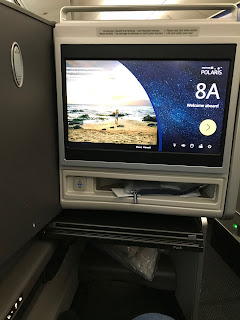 I haven't been away from my city since before Corona. I wonder if we'll ever get back to anything resembling normal.