Saturday on the PCH

MLK weekend comes hot on the heels of the December holidays, and I'm always caught by surprise. Too late to make a plan, too expensive to buy a ticket to head out of town for the long weekend.

But that's okay as I have plenty to do in Burbank. But still, I like to take one day out of three to see something new.

The Eames House has been on my short list for some time. I looked up how to get there by public transit. Easy enough, assuming I have other things I want to see in Santa Monica. I bought a ten dollar admission ticket to see the exterior of the Eames House just under the village at Pacific Palisades.

But then I looked on the map and saw the Getty Villa was just down the road, less than ten minutes north on the PCH.

But the bus to the Getty didn't stop anywhere near the Eames House. Curses.

I rented a car and added more stops to my day's itinerary.

First stop was my office. I picked up a few boxes I'd been meaning to post, wheeled them on my wheelie-cart to the car, and stopped by the post office later.

Next stop: BOCA. It's a boutique that I stumbled over on Montana Avenue in Santa Monica back when I first moved to LA. Then the boutique closed and I was sad until I looked it up and learned the Montana Avenue shop had been a temporary relocation for this Pacific Palisades store. I headed there first in my rental car, then zipped down the hill past the bus stop to Corona del Mar. Plenty of street parking on Corona del Mar, so I parked there and walked over to the Eames House. 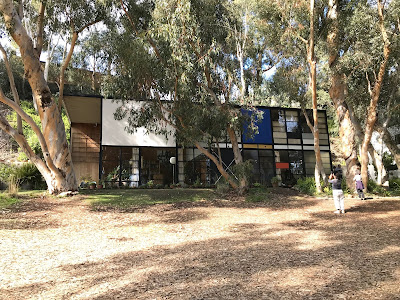 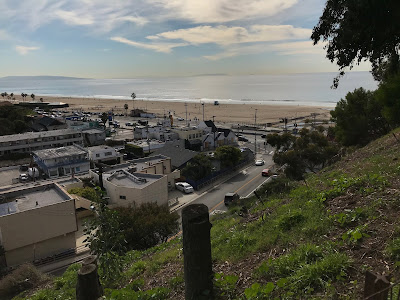 The Eames House is lovely and fascinating, but it's also a short visit where you walk around the grounds and peer at the house and in the windows.

I walked back to the car and drove north on the PCH to the Getty Villa.

I'd read this was an overcrowded spot, so I'd booked ahead to get the timed entry pass. Fortunately, a January Saturday isn't the time for tourist hordes, and the Getty Villa was not at all crowded.

Next, I headed to Topanga Canyon. I'd spotted an Indonesian crafts store online and also the unexpected--a Bhutan store.

The Indonesian store was unremarkable and the Bhutanese store was closed. I stopped in the Topanga town center for a coffee-and-browse expedition, then headed back to the valley. 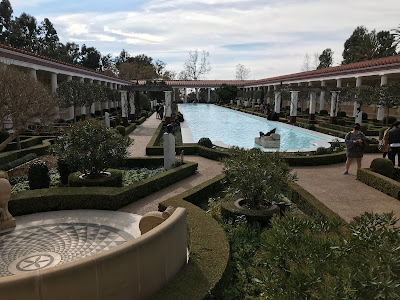 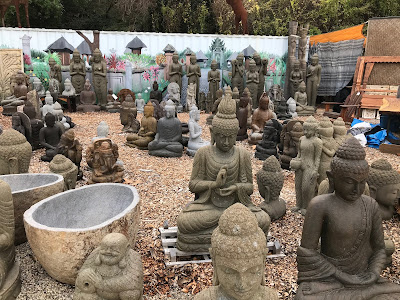 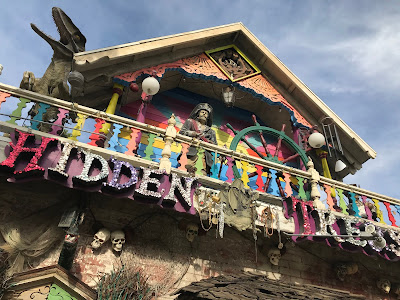 The villa is quite a sight.