The Other Marie was in town last week--I was back East for most of it (at BookExpo, formerly BEA), but I returned to spend some time with her before she flew home. 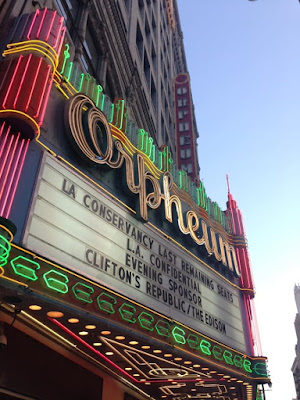 She'd rented an apartment in DTLA. It had two beds, so I stayed with her instead of dragging her back and forth to Burbank.

We went to LA Confidential at the Orpheum, wandered the streets where I had sublet when I first arrived in Los Angeles, ate at the Nickel Diner, and enjoyed briefly feeling like we had other lives.

"Downtown is so much like our old neighborhood," Marie marveled, referring to our Avenue B places back in the nineties. (There's even a Two Boots, which was a thing before it was a thing.)

On Sunday morning, we walked to the metro. We were heading to Culver City to meet our friend Steve—formerly of East 10th Street in Manhattan, among other places.

Two men approached us, walking the other way.

"The ladies of 7th Street are pretty," said one.

The comment hung in the air, as we thought about the old days in the East Village, when men said strange things and young women (which we were then) smiled nervously or looked the other way.

"Yeah, but a lot of them are hookers," said the other, as he looked us up and down.
Posted by Marie Javins at 9:00 PM