What's It With Me and Feet?

Do you remember this? I stubbed my toe on the vacuum cleaner the night before leaving for my mother's house a few days before flying to Mexico. That was in July of 2013. 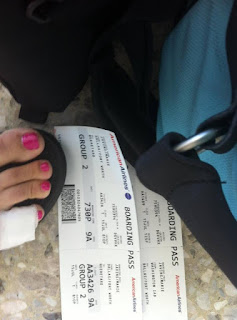 Then do you remember this? I vaguely remember stubbing toes on the other foot, then walking all over Manhattan right after. When I got up the next morning: ouch. This was in October of 2013. Same year, different foot. My podiatrist in Jersey City is great, and his assistant was a big fan of Iron Man. I was writing an Iron Man novel at the time. 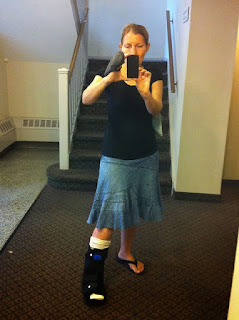 Well, now I have a new treat to share with you. I'll try to get a Burbank podiatrist appointment in the morning, but if not, maybe my JC guy can take me when I get home on Thursday for the long weekend. 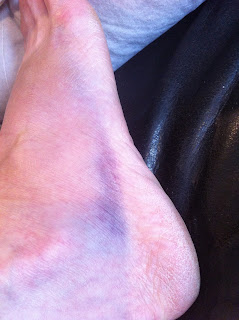 At least this time, I know what I did. I ran across Hollywood Boulevard--not exactly against the light, but after the little countdown had started. That's technically illegal here. Los Angeles takes its jaywalking seriously. I didn't get a ticket, but I did hit an uneven bit of pavement and nearly go sprawling. I semi-recovered and continued to trip a little, and thought "Oh hell, I'm going down." I felt my shoe fighting my foot and nearly lost it.

I didn't lose the shoe or land on my face, fortunately, but I did damage a foot. I continued on to the apartment-viewing appointment I had with a sweet-as-pie former resident of Jersey City Heights. I liked her, I liked the loft-style apartment, but I ultimately decided I preferred the older places up the hill a bit and even something in Toluca Lake or Magnolia Park, Burbank. I'm a little concerned about ending up in Hipster-ville, and it's important to me to have people from different economic and social backgrounds living around me, so I think I might need to avoid newer developments with all the bells-and-whistles.

But maybe I'll think about getting a place with an elevator this time.

Addendum: Hey, wait. Looking at the photos...that's all the same foot, isn't it? I really do not want a second right walking boot. It's a shame mine is in my garage in New Jersey.
Posted by Marie Javins at 8:44 PM

Doc says with that bruising you either broke something or tore an ankle tendon, probably the latter, hopefully just partially, rolling ankle out in misstep?That would hurt on the outside side.It's gonna hurt for a month or so and some support would be nice, like some nice boots. Nod in Cali