From the Valley to Downtown

My stay in Studio City was harmless enough--it seemed fine, and I appreciated the anonymity of the generic serviced apartment, as well as living almost on top of the metro. I couldn't believe how easy it was to get to work. The #155 bus stop was outside the building, and let me off right at the corner of the Burbank building my office is in.

I sometimes feel smug for managing to get around on public transport here. Everyone told me it couldn't be done. But then a bus comes early or late, which isn't like home where you just wait another five minutes. Sometimes they only run every half-hour or hour, and then I'm reduced to Uber. On the worst night, I'd just missed the #222 bus after dropping off my rental car at Burbank Airport. It was around 11, and I had an hour to wait. I pulled out my phone and searched for options.

I finally used Uber, which I get a little annoyed every time I do that, because it feels like defeat. But I didn't want to hang around on a street corner for an hour. 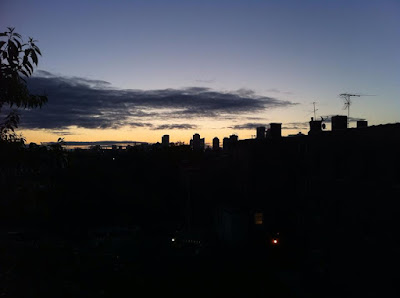 On my last morning in Studio City, I packed a bag in a bag in a bag--three mostly empty bags to take home to JC where I'd fill them up for the return trip. I dragged it on the bus to the consternation of commuters, and left for Newark from work via the Burbank Airport.

Both flights were late, and I missed the connection. I hate you, modern domestic flying. You are horrible. But Burbank Airport is tiny and cute and easy. You could do worse. Try the enchiladas.

I disembarked late--the window guy was meeting me at The Lafayette (so named by my deadpan, charming contractor, and I think it's going to stick), and I needed to be there by 10. Uber is wasted on a trip you can easily do by public transport, but I grabbed a latte, then opened up the app and got an Uber to my garage, where I rolled up the door and reclaimed my 1990 Ford Taurus.

I was home in time to shower before people started showing up. I had to make a comic before I was allowed out of the house to run errands, but at least I was there in my own home, which is looking better and better with each small improvement. Art on the walls, curtains on the windows, my crap packed up and ready to take back to LA.

I saw friends and socialized, stopped by my PO Box, bought octopus earrings at the Grove Street market, dropped way too much money on clothes at Lingo (imagine if I'd also gone to Flirt Brooklyn), and went to Home Depot eight times.

Finally, on Monday morning, before the crack of dawn, I put my car back in the garage and got an Uber back to Newark. I slept all the way back to LAX, where I stumbled over the $8 shuttle to Hollywood. From there, I caught the Red Line up to Studio City and got a taxi to work. At the end of the day, I caught the bus back to the Red Line and took the metro to Downtown LA. 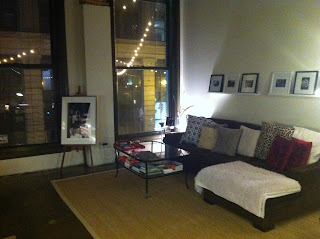 At Pershing Square, I was catcalled. I was startled. And then I walked past the gaggle of people hanging out by 7-11. DTLA is sketchy--with wealth and poverty living side-by-side, if not hand-in-hand. I was skeptical. I'd lived in something like this on Avenue B in the nineties. I didn't want to do that again.

But after putting my luggage away in a converted industrial loft, I went out to find $10 Vietnamese carry-out and a bodega right downstairs. And the metro was a five-minute walk away.

Perhaps I'd been hasty in my judgment. I kind of love DTLA.