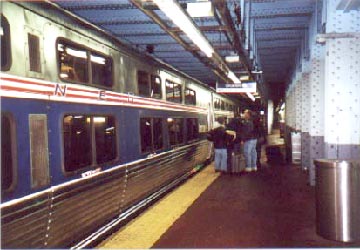 I'm watching everyone go feral over the Amtrak writers residencies, and yes, it sounds so great. The clang clang clang as you slowly pull through town. The lights fading away. The Doppler Effect. Sharing an interesting meal with strangers.

There are 24 slots available and about 700,024 people applying from the way social media lit up today. I like the concept very much, thank you, but in reality, it only takes 3.5 days to get across country. I don't get all that much done in 3.5 days, if I'm honest. And I've been paid to write by Amtrak in the past, so I'm not sure I'm even eligible.

Plus, the rules are clear. You apply and you give up rights to your application. I'm not totally comfortable with that, and anyway, I learned a long time ago that free trips aren't free. You become a PR agent. Yay?

But I don't have any right to talk of such things. The first days of MariesWorldTour.com started out in New York's Penn Station, and I got an amazing discount on my sleeper car across country.

I got a little work done, but I got a lot more done on the endless freighter voyages.

“Ladies and gentlemen, welcome to the Lakeshore Limited, Amtrak #49 bound for Union Station, Chicago,” came the voice over the loudspeaker. “This train is a zero-tolerance train. The next stop can be yours.”

That, I thought, is something I won’t hear anywhere but America.

I was dead tired. I’d been planning my trip around the world for months, but no amount of planning could prepare me for the aggravation of quitting my job, selling my apartment, storing my entire life in a 10x10 cubicle in Jersey City, gearing up, scheduling my trip, and leaving behind my friends, family, and beloved Manhattan for the adventure, pain, and inconvenience of the open road. I’d been frantic for weeks, following up on trip details, chasing down sponsors, and packing dusty books into boxes. I visited the post office about six times during my last two days of packing, mailing extra stuff to my Los Angeles base to sort out upon arrival. 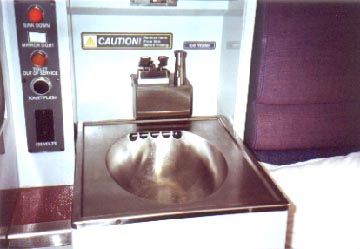 I had been getting about four hours of sleep a night as I organized, packed, and signed over power of attorney to my attorney. My backpack was too heavy, and the line at the post office too long. I missed my first train from New York to Chicago by about ten minutes.

Amtrak had been accommodating and kindly switched my departure date to the following day. I found myself in a tiny sleeper compartment, attended by a man named Wallace. Trains are relatively small in the Eastern US, due to the constrictions of the many tunnels. My compartment consisted of two padded chairs that convert to a bed, a top bunk, and a small video screen, showing Chicken Run and Toy Story non-stop. There was a flat shelf that, when lifted, converted to a toilet. Likewise, the sink pulled down out of the wall, and when you tipped it back, the water ran out of a drain at the rear. I stared out the window at the foot of snow and ice that New York was under, and immediately fell asleep.

I woke up hungry, and made my way to the dining car for dinner. It was crowded. Intimidated, I left for the café car, which primarily services coach travelers. I bought a Buffalo Chicken wrap and sat by the window nibbling, watching the snow go by. Still suffering from a lack of sleep, I made my way back to my compartment to watch Chicken Run.

Five hours into my trip, as I slowly came out of my daze, I realized I had a totally private room on the first leg of a grand tour of the world, financed by a real estate windfall. No bills, no job, no mortgage, not even a plant to water. I’d scored the ultimate trip. Happy for my Discman, which I was taking no farther than California, I put on Joan Jett’s Bad Reputation, played it loud and danced around as much as my tiny sleeper compartment allowed. Twice. What a score.

NEXT: Amtrak’s “Southwest Chief” Superliner from Chicago to Albuquerque. 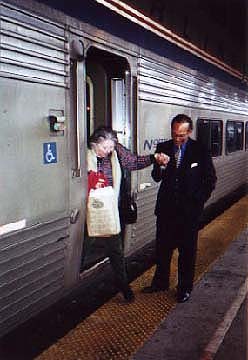 In Chicago, after leaving the Lakeshore Limited train, I changed to the Southwest Chief. The Chief runs from Chicago to Los Angeles, following the old Santa Fe Trail and some parts of Route 66. I hurried up the platform to my sleeper car—Chicago in January is pretty brutal, and due to the limitations of my backpack, I wasn't carrying winter clothes.


The train was enormous. It looked about twice as big as any train I'd ever seen back East. I would have stood and gawked, were I not racing to be out of the cold.

A small woman in a giant Amtrak parka, the hood pulled so tight I could only see her eyes and nose said, "Hi, I'm Joan, your attendant. You're in car 0331, right over there."

I placed my bag on Joan's luggage rack and collapsed into compartment 11, closing the door and turning the temperature control up to 80. I took off my shoes, put my feet up and turned my attention to the on-board propaganda.

"The Southwest Chief is among the finest of Amtrak's long-distance services," read the pamphlet. "Our historic route was first traversed by the earliest Indians who first discovered its twists, turns and passes. Later, conquistadors and fur trappers became familiar with the route. By the time it was called the Santa Fe Trail, caravans of pack mules, wagon teams, prairie schooners and stagecoaches were lumbering over it daily, carting people and goods between the Missouri River and the Rockies."

Interesting, but not very satisfying. I referred to an older version of the propaganda, that I had downloaded from the Internet. 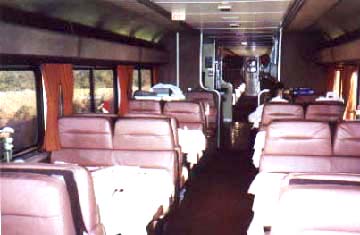 "Movies will be shown in the Sightseer Lounge car. On-board Indian country tour guides from the Inter-Tribal Indian Ceremonial Association of Gallup, New Mexico, will ride with the train between Albuquerque and Gallup to point out scenic highlights. Join fellow passengers in the Lounge Car for drinks and complimentary snacks. First Class passengers received complimentary meals in the dining car."

Right about then the dining car steward knocked on the window across the hall. "Oh, I'm sorry, lady," he announced loudly for all to hear. "You are naked."

He then chuckled at his own joke, and I heard laughter from around the car. He knocked next on my window, to ask me when I wanted to eat dinner. I said 8:30, thinking that the dining car might be less crowded then. 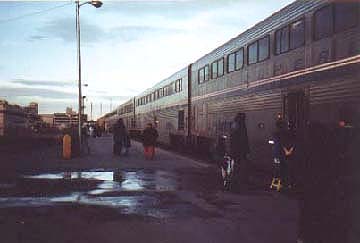 It was. There were several empty tables but I was seated with two other single travelers. This was my first taste of the real appeal of the long-distance Amtrak experience. It's a summer camp on wheels, where you spend days eating and hanging out with complete strangers. In the Coach cars, you even sleep with strangers. I peeked into one at night and beat a quick path back to my sleeping compartment. There were people (and possessions) spread out everywhere in the darkened car, and it was easy to fall over a stray foot or leg. Some people even took up residency in the lounge car, stretching across multiple seats. This was not a comfortable sleep, though, as these squatters were evicted early in the morning when other passengers wanted to lounge or sightsee.

My dining companions at the first meal turned out to be pleasant people. The woman was a high school guidance counselor from Orange County, and the man was a working actor from West Hollywood. Both of them disliked flying.

This was a common theme among nearly one hundred percent of the people I met on the Amtrak. Almost universally, they were afraid of airplanes. The only exception was one dimwitted fellow who believed that the cross-country Amtrak was cheaper than flying, which it is certainly not.

The actor, it turned out, did occasionally have to take a plane. He had been in The Mummy a few years ago (he was the Mummy's cohort and was eaten by scarabs at the end), and had taken a plane to and from Morocco. The guidance counselor, however, hadn't taken a plane in years. She was aware of the statistics, knew that her fear of flying was irrational, and was excited to hear about the possibility of taking a boat to Australia.

We lingered for about an hour, over tasty penne pasta and good conversation. The actor showed me a picture of himself in Entertainment Weekly. He'd picked it up for something to read and there he was, as the "wacky oncologist" from Gideon's Crossing. My dinner companions were experienced Amtrak veterans, and were able to answer some of my questions.

The last one was a relief. I'd been eyeing the top bunk in my compartment and wondering when someone was going to show up to claim it.

We all three left our two-dollar tips and went our separate ways. The actor went to the lounge car for some late-night socializing and the guidance counselor went to her compartment. I went back to car 0331 and checked out the facilities. 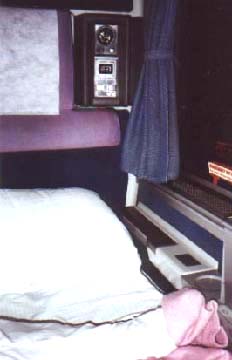 The Southwest Chief Superliner doesn't have en suite sinks and toilets. These are shared, and located down the hall from the sleeping compartments. They look exactly the same as airplane toilets, and flush about as well, leading to some occasions of breath-holding. The showers were tiny, but very warm and clean. A drink station was located on the upper level (yes, the Superliners are double-decker), and you can get bottled water, juice, coffee and tea at any time.

Joan the attendant converted the padded seats in my compartment into a bed and I turned in. I turned off all the lights and stared out the window at the passing shapes and railroad crossings. I felt asleep to the Doppler Effect, as the engineer blew the horn through the small towns of Missouri and Kansas.

NEXT: The "Southwest Chief” Part 2