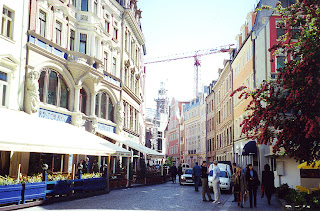 Imagine my surprise when I learned two of my 11 students were creating art portfolios with Stalin as part of their themes. These choices were disconnected—they barely know each other and studying in different majors.

"Have you heard of the Soviet-era sculpture park in..." I paused. Was it Lithuania or Latvia? I was there in 2001. "...whichever country it is that has the Frank Zappa bust?"

I went home and looked it up, then scanned in my photos. The park was in Lithuania, and it is still there.

Here's what I wrote in 2001, and the accompanying photos. What's weird is I have NO recollection of catching a lift back to Druskininkai. I don't remember even being in that town.

Supercharged on bananas and caffeine, I went to the bus station to catch one of the hourly buses to Druskininkai. 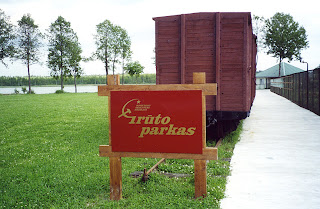 I asked the driver for a ticket to "Grutas Parkas"—it wasn't really called "Stalin World," except in hip, English-language magazines. The bus was filled with schoolchildren and seniors, many carrying luggage in plaid, plastic, zippered bags.

During the two-hour ride, I got a feel for how Lithuanians make their way around their small country. The bus was the lifeline along its route, stopping at bus shelters on remote roads that seemed to stretch off into nowhere.


The countryside itself was relatively unpopulated, with the occasional cluster of farmhouses breaking up the forest and yellow-green fields. 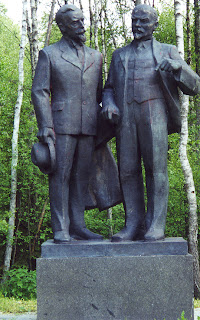 I was following our route on a map, and knew when we were getting close. The bus driver slowed, looking directly at me in the rear view mirror. I moved towards the front, ready to disembark quickly. The bus stopped.

"Zwei kilometer," said the driver, motioning to a road on the left. I was to walk two kilometers up that road.

I nodded and left. The bus pulled away in a road, leaving me alone and surrounded by only the sounds of birds, insects, and rustling leaves.The two kilometer walk was up a country lane. No cars passed. I took my time strolling down the asphalt. The sun was out, the weather was warm, and I was the only tourist for miles. 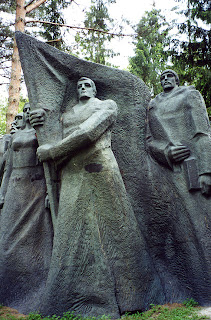 Gruto Parkas was conceived and financed by Viliumas Malinauskas, a local millionaire who had made his fortune off of canning chantarelle mushrooms. His personal estate was next door to the park, and was marked liberally with "no trespassing" signs.

Magazine articles call it either "Stalin World" or a "Soviet theme park." It's actually a sculpture garden, containing only old Soviet propaganda sculptures. When Lithuania declared independence, the Soviet sculptures (many of Lenin and Stalin) were immediately uprooted and left to rot in dumps and junkyards. Malinauskas took it upon himself to commemorate a time no one seemed anxious to remember. He collected the sculptures and brought them to Grutas.

A cattle-car—the same kind that once took prisoners to Siberia—marked the main entrance. I walked down the narrow railway-like path to the ticket office, paid my five litas, and walked first to the cafe for some chantarelle mushroom stew. Then, I was ready for a little Red nostalgia. 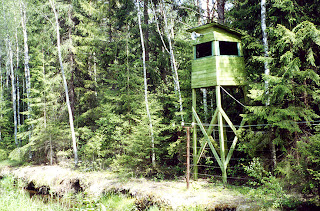 The site itself was a wooded forest, and the two-kilometer boardwalk wound through the trees and over a swamp. The first sculptures were the most user-friendly; they were just soldiers, or "the people."

Then, there was a small museum of Soviet memorabilia and the park kicked into high gear.

There was Lenin standing, Lenin sitting, giant Lenin, small Lenin, Lenin by the same artist who sculpted Frank Zappa, Karl Marx in a variety of poses, and every possible respectable variation of Stalin sculpture. Some sculptures even featured Lenin AND Stalin, a real piece of artistic license as Lenin reportedly did not even like Stalin. 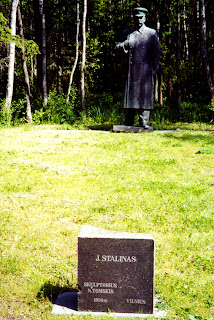 Surrounding all this was a fence of barbed wire, intercut with occasional guard towers. This protection served a double-purpose of keeping out potential saboteurs (not everyone appreciates the park), and giving tourists an idea of what the Gulag looked like. And perhaps, poetically, the fence symbolically keeps Stalin locked in his own Gulag for all eternity.

The park was bizarre, but unfortunately, only took about an hour to get through. The next bus wasn't due for an hour and a half.

So I would have to hitchhike to Druskininkai. It wasn't a bad idea, as hitching is quite common in Lithuania, but the problem was that I didn't think I really had it in me to stick out my thumb and ask for a ride.Did hitchers even use their thumbs in Lithuania? I didn't know. In some countries, you hold your arm out and wave it slightly.

Of course, looking anxious at the bus stop on the road to Druskininkai was not the most effective way to get a ride, but it was all I had the nerve to do. Four cars passed me, and then an old lady with a cow walked by. She chatted to me, probably telling me that I was never going to get a ride like that. Finally, a car pulled up.

The friendly couple inside the car drove me seven kilometers to town. They left me at the outskirts, giving me exactly enough time to have a quick walk through the resort town of Druskininkai before I had to head to the bus station for my ride back to Vilnius. 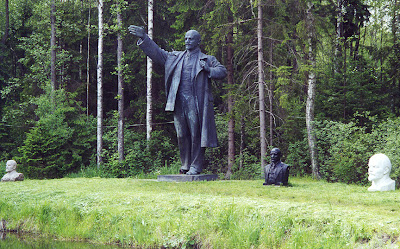 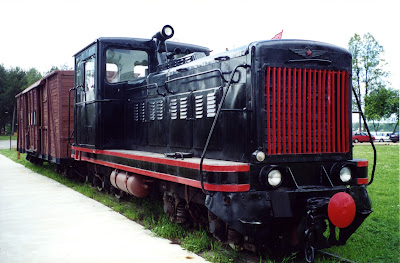 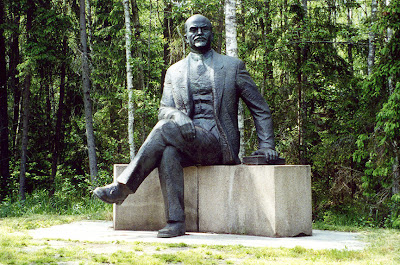