I'm working on a book that is due on November 12, and I can't really stop to go to the gym, my office, or write on my blog at the moment, but I really should point out that I'm fine.

I lost power from about 11:30 on Monday night to about 1:30 AM, 26 hours later on Tuesday night/Wednesday morning. I had hot water (gas water heater), my phone landline, and my gas stove working fine the whole time. I haven't had water problems (yet). I'm on the fourth floor of a solid brownstone rowhouse built in 1880. It's been through many storms, and I didn't really feel the wind in here.

On Tuesday afternoon, I'd taken my car up to Jersey City Heights to check on Michael Kraiger. He was fine aside from this giant tree having taken his power out for a day. He got power back later Tuesday evening, though we charged his phone up in my car, not knowing how long it would be. 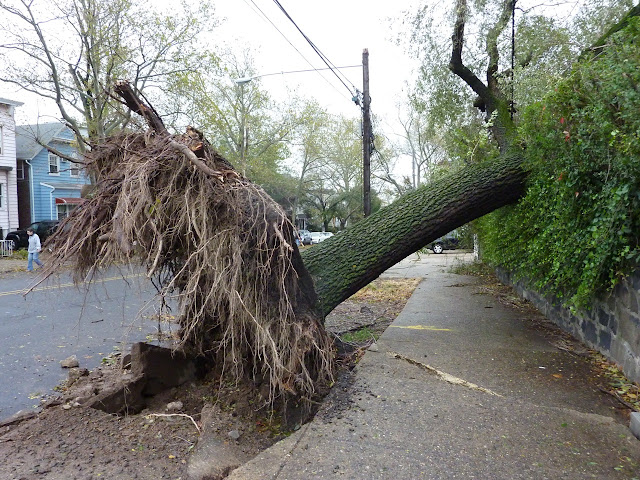 Shops near me started reopening on Tuesday, with Basic up and running on Wednesday morning. That was a bit zombiepocalypse, with people and their devices plugged in all over. I got power back before much of the neighborhood, apparently. The grocery stores opened back up quickly, though there was a rather pointless and stupid lockdown in JC on Wednesday, where everything closed and we all had to be home by seven at night.

My food didn't even have a chance to go bad. Plus, I'd done laundry and filled up my car with gas, gotten out a hundred dollars in cash from the ATM, so I was ready for longer stint without power. But I'm now ridiculously grateful for electricity and glad to have it. Like when I lived in Uganda, I found that as soon as the power went out, I wanted to go to sleep.

I walked over to the Hudson yesterday, and the Newport to West 39th ferry is running constantly. Of course, it's eight bucks a pop so I probably won't be running into Manhattan on a whim. But today Roberta caught the jitney in—that's only $4.25, or $2.50 if you buy a ticket at the window and then walk down the hill from Journal Square.

In the Newport Mall, there were power-squatters at every outlet, and the places that were open in the food court were packed with people ready to eat whatever they were cooking. And over at the highrises on the waterfront, giant dumpsters were being filled with ruined furniture, books, wood. 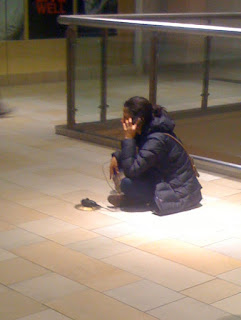 The Hudson came to visit us here on Monday night during high tide. I am two blocks from the new water line, fortunately, and my car was fine this time, but pretty much all of Paulus Hook appears to have been flooded, along with the lower levels of Newport. And Hoboken...my god. And just now people are starting to realize what Staten Island endured along with Queens and the Jersey shore.

The situation is not over for people who lost everything, or even some things, and people who were nowhere near the shore are still lacking power in parts. But I am fine. Roberta is fine. My pocket of Jersey City is fine. We have food, stores are open, and the only problem here now appears to be lack of gasoline. I have plenty, but I don't need to go anywhere so at some point, I might just lock my car back in my garage in case people start getting carried away.

So all is well here. Certainly, relative to other parts of New Jersey, we made it through pretty well. People are pumping out their basements and sorting out the damage. The rail tunnels aren't looking great, nor is the Holland Tunnel, but in time, they'll get things up and running.

Here are some photos I took on Wednesday and Thursday.
Posted by Marie Javins at 11:52 AM

I saw photos of people on foot lined up holding gas cans. Guess a gas generator is useful only if you have gas.

Oh, did you hear the parking garage attendant on the radio who was charging cell phones? The garage was closed but he had showed up for work and was using cars (whose?!) to charge up cell phones for $5 each.

$5 seems like a lot to charge a cell phone, but that reminds me of the shops in rural Africa, where someone has a business charging phones off a solar panel.

The gas lines here snaked for blocks and were manned by police officers. Crazy. Glad I have options.