On Talking Walruses and Buying Monkeys

I was paging through Time Out while riding the train on Thursday. Some weeks I scan the listings, and some weeks I genuinely read them.

This was one of the weeks where I actually paid attention.

And was first glad, then sad, that I did.

Chris Elliott was speaking at 92Y Tribeca alongside a screening of the demented 1994 movie Cabin Boy on Friday night.

Now I don't really need to see Cabin Boy in the cinema again. Once was enough, and I was there on opening night in 1994. It's bad, actually, but in a deliciously absurd wince-inducing way. But I do need to see Chris Elliott live, because I've been a big fan of his goofy humor since his 1990-92 sitcom Get A Life, where he played a 30-year-old paper boy. Between me, the Other Marie, and Otis, we managed to record most of the episodes, and those I missed out on, I found online or borrowed from some of the guys in the Marvel Bullpen.

A few years ago, I moved all these from VHS to digital, but the quality of some is nearly unwatchable. There was some kind of rights dispute about the show and only a few of them ever made it to commercial release.

When I got to my office on Thursday, I immediately tried to buy tickets to see Chris Elliott.

Boo-hoo. This can't be right. I must see Chris Elliott.

So I checked Craigslist. This was a long shot, I knew. People don't scalp tickets to see Cabin Boy.

There was a listing from earlier in the day, offering two free tickets to whoever would come to Williamsburg to pick them up before midnight.

I dashed off an email, knowing that Craigslist is a spazzy way to get anything. It always seems like half the Craigslist community are fakes or flakes.

I didn't hear anything back until right before I was going into the gym at six o'clock, back home in Jersey City.

The woman in Williamsburg still had the tickets.

"I'll be there at eight," I wrote back. I went ahead to the gym and then raced home after, changing clothes before running out in the rain. I drove my car to the Grove Street PATH, and parked across from La Conguita, then raced down the block to the train. 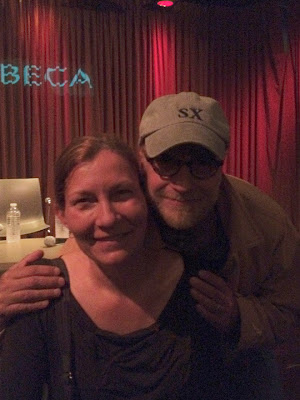 Getting from Jersey City to Williamsburg is a pretty painless commute. The PATH goes to the L train at 14th Street, which whisks you right over. I've gotten home faster from Williamsburg before than from Manhattan.

I was out in the rain in Brooklyn in no time, walking to the woman's apartment just down the block from the original Barcade (the Jersey City one is an offshoot). She buzzed me into the building, handed me the tickets and wouldn't take money for them. I was back to Jersey City in a flash, texting Roberta as I went.

And it turns out that Roberta also loves Chris Elliott.

We had a grand time on Friday night, watching this ridiculous movie and then watching Chris Elliott and his director/co-conspirator Adam Resnick (who it turns out went to NYU film school with some guys I know). I was amused to see a few people I knew there, and this made me proud to know goofballs.

The two men up on stage were fully aware of the absurdity of Cabin Boy, and it wasn't their proudest moment. But everyone on the audience was in on the joke, but more importantly, everyone in the audience was excited to hear this tidbit:

Get A Life is finally coming out on DVD in the autumn. Zoo Animals On Wheels, Handsome Boy Modeling School, and Spewey.