I'm a bit frantic. Today I worked on sorting out filing some compliance documents for the work 401k, tracked down our unemployment percentage for the new payroll service, threw a bunch of stuff away, and brought home more boxes. I'm trying to get my trinkets and books out of my apartment, since my tenant is going to become two tenants in a few months. They'll need space.

And on the train, I read about Ghana. I'm no expert, but I think I have enough info to plan a trip. We're still pretending I'm racing around, because I need to understand the minimum time it will take me to cross Africa before I start factoring in longer stops.

April 4: There's a 7:00 a.m. bus on Sunday and Thursday to Kumasi, Ghana. Unfortunately, April 4 is a Monday. Let's face it, odd of me getting there precisely that day are slim. Anyway, I can use this as a guide. There are other buses, and if nothing else, there's the shared minibus for 2-3 hours to the border, walking across to Paga, Ghana, then hopping another minibus 90 minutes to Bolgatanga, then to Tamale (2.5 hours) and then staying there or getting another bus to Kumasi (7 hours—early start day).

April 5: Kumasi, Ghana. Kumasi is a city famous for its crafts.

April 6: Kumasi to Takoradi, 5 hours. That's in the west, along the coast. But that's not the end of the day. After that, I get a minibus from Takoradi to Beyin (3-4 hours), in the far west. Because that's the launching point for the trip I'm taking the next morning.

April 7: I'm not really going April 7, because I'm unlikely to be on this precise schedule by then. And that's good, because today's destination isn't open on Thursdays. I'm heading to a stilt village named Nzulezo, which is an hour away by canoe. The trip must be booked in Beyin, where I also have to pay for the canoe trip. The canoe goes through wetlands to the stilt village. I'll have a look around and then the canoe takes me back to Beyin. Then it's back to Takoradi, then on one more hour to Cape Coast.

April 8: Cape Coast is a nice coastal town with an old castle. Sounds like a nice place to spend a day.

April 9: On to Accra, which is only three hours away. There doesn't seem to be much to see in Accra, so my time spent there will be determined by how many visas I need. And then, it's 4.5 hours by bus or minibus to the border with Togo. 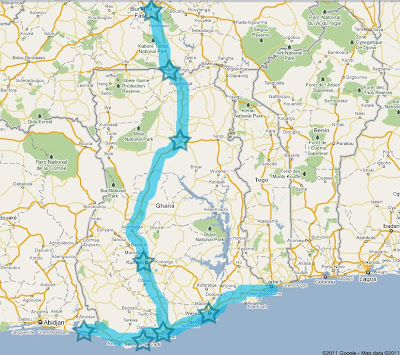 *You might notice that I'm not going to Mole National Park. I'm thinking of going on safaris a bit later, if at all. Living in a national park in Uganda kind of spoiled me.
Posted by Marie Javins at 9:46 PM