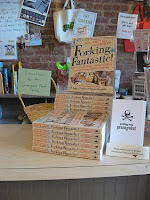 On Sunday night, I trekked over to Greenpoint on the worst public transport weekend of the year. Trains were canceled, broken, and delayed. But I had to go, because I couldn't miss the in-store appearance and bookstore potluck of Zora and Tamara's new cookbook, "Forking Fantastic," especially considering it was arranged and hosted by my pal Kelly. She's events coordinator at WORD, and we last saw her looking puzzled while a baby ate an atlas at my appearance on the Upper West Side.

I'd whipped up a batch of ANZAC biscuits that morning. I felt guilty for not taking a stab at one of the recipes in the cookbook, but I'm still a bit scared of the kitchen. I'm not much of a cook. I know how to do a few dishes, such as Thai veggie curry, artichoke and spinach risotto, and chicken-with-peppers. That's about it aside from dessert and breakfast.

Zora and Tamara host underground supper clubs in Astoria. What this means is that an e-mail goes out. The first 20 or so people who respond get to come to dinner, but have to show up with $35 and a bottle of wine. I've spent many a weird, wonderful night eating meals next to random strangers in Tamara's backyard, though it took me about a year of getting their quirky e-mails before I finally responded. To be fair, I was in Cairo for much of that time.

The bookstore appearance was fantastic. Best bookstore appearance I've ever been to. The food was excellent and the attendees were unpretentious and chatty. And the cookbook itself? I've actually been reading it as narrative! The story starts with two young somewhat impoverished women showing up in NYC. They meet, 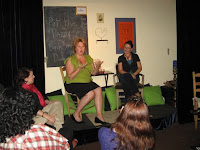 they bond, and they cook together. And they get very, very silly as well. It's an excellent read! Maybe one day I'll actually try one of the recipes.

Here are some words of wisdom from Tamara and Zora: 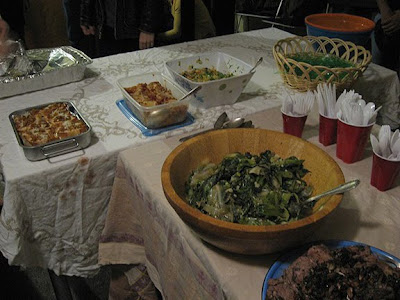 It was fun to have you there, so glad you could make it! And help make it happen! - Kelly

I'm hungry. I wish there were underground supper clubs in Athens.