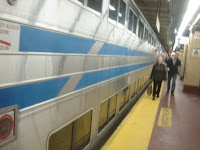 I had about 25 minutes to waste last Friday afternoon. Shannon was visiting NYC and in 30 minutes, he'd return to my office and pick up his suitcase. In 20 minutes, the office assistant who shares my office would leave for the day. I wanted to go back when he'd left just because I get really squirrelly and petulant when people are in my space. Squirrelly and petulant might even be an understatement. The right term might be... oh, I don't know. Psychotic rage, maybe.

Any space. Office works as well as home.

Penn Station, which is the train station under Madison Square Garden, is across the street from my office. So I wandered around Penn Station, looking for the wine store to note its location for the next time I go to the Astoria supper club after work.

I saw a map and some schedules. What is this Long Island Railroad anyway? I'll read these maps and schedules. Maybe I'll learn something.

There's a schedule for the Airtrain.

I'd never considered taking the Airtrain from Penn Station. I've only been in my current office for a year and from other locations in Manhattan or Jersey City, there are a half-dozen convenient, cheaper ways to get to the airport.

Hmmm. Shannon could go on this train to Jamaica, then get on the airport monorail there. Looks like it takes 10-20 minutes less—at least—than the A-train to the Rockaways.

I bought him a ticket. When he showed up at my office, he asked "What's the best way to get to the airport now?"

"Don't worry about it. I've got it covered. Here, check your e-mail before we leave."

"Fine. Less for me to think about."

We've known each other a long time. 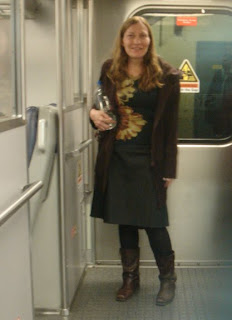 The train was clean, modern, easy, had a seat, and whisked him to the airport in style.

I never saw the point of the Airtrain before. The subway goes to the same place and has better connections. But now I got it. Fast. Easy. You could fall asleep on that thing.

I got it so much, in fact, that when Thanos flew in a few days later, I instructed him to come straight to my office.

On the Airtrain.
Posted by Marie Javins at 7:50 AM