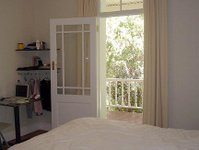 Whoever gave Chicago the slogan "the windy city” had obviously never been to Cape Town.

Maybe it’s because I’m living halfway up Table Mountain, but it does seem like the wind never stops.

It blew the bucket and mop off my balcony. But given the state of filth in the flat, these obviously weren’t used anyway.

A few days before my week’s rent was up, I e-mailed Alex that I would not be staying. I heard nothing back, so the day before sent an SMS text. That produced no results so I called the office and spoke to the receptionist.

“Oh yes, we read your e-mail this morning,” she said. Efficiency at its finest.

I still had to suffer through several attempted guilt-inducements when Alex finally returned my call at 8:30 p.m. the night before I was to move out.

“The only reason you got such a good rate was because I thought you were staying two weeks.”

Yeah, well, no one mentioned the cockroaches, the broken sink, or the filth when they were giving me my “fantastic” rate—which by an amazing coincidence, matched exactly what I’d said I could pay.

I worried that she’d think of a reason to keep my security. Thankfully, she kept only 80 rand for cleaning; never mind that I’d left the place far cleaner than I’d found it. Never mind that she neglected to reimburse me the overdue electricity bill I’d paid. Never mind that she treated me like an idiot when I pointed out the leak under the sink.

“Oh, it’s just this loose pipe,” she said as she tightened a PVC joint.

“If it’s just a loose pipe, why did someone attempt to repair it with plastic, put a pie pan underneath to catch the water, and smear the basin seams with white caulk?”

She waved dismissively. I took the anemic refund and fled to my beloved Cape Town Backpackers, promising myself to renounce cowardism in the future (more on that in a few days).

Leah was at the front desk at Cape Town Backpacker’s.

“Marie, any apartment that rents by the week…” she started gently. She wrinkled her nose.

She was right. I’d learned a lesson but fortunately, my old room was available. They’d even left the desk in it that they had dragged in for my iBook. The builders—who know me by name now—were re-tiling the shower floor again. I’d have to shower in the dorm, but I got my discounted old rate too. And I’d been involved with the tiling from the beginning so I didn’t mind. The toilet was still leaking from the putty repair—maybe I’d just let that go rather than risk another long conversation with the toilet repair guy that liked to talk about Wolverine.

I opened up my balcony door and breathed in the fresh air—more an attempt to avoid the construction fumes than a comment on the air being better outside the backpacker’s than outside the flat.

I’d produced three satisfying book chapters, the intro, and two “real-iffy” chapters while I was in exile at Filth-Flat, so I allowed myself the day off (plus I needed to get out of the builder’s way). I didn’t have anywhere to go, so I hopped in a mini-bus and went downtown to wander around Golden Acre, the people’s mall (as opposed to the V&A Waterfront, the tourist’s mall).

I walked aimlessly through a surge of well-dressed Africans. People were shopping, going to the train station, or in search of lunch. I browsed the stalls at the flea market, upstairs from the train terminal—every stall seemed to sell products relating to cell phones. Air time vouchers, SIM cards, and phone covers were everywhere. Much has been made of Africa being one of the hugest growth areas for cell phones. But given that just about everyone in the US and Europe seems to own two or three old phones by now, I don’t know why that should surprise people. Other markets are saturated, so growth has slowed. Africa got a late start, and landlines (outside of South Africa and Namibia) are either unreliable, non-existent, or—in some cases—stolen. Cell phones make perfect sense here. (And airtime costs a fortune, thus the proliferation of SMS texting in Africa.)

I walked back to Cape Town Backpackers. The builders were gone, but at least there were people around to talk to. I could pretend they were my friends and feel a little less isolated in the world. Soon, I promised myself, I would start heading north. My flight is out of Uganda on November 18. Time’s a’wasting as I spend my days in windy, seductive Cape Town.
Posted by Marie Javins at 1:14 PM