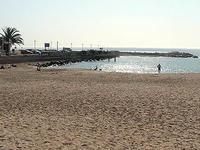 I’d arrived in Swakopmund, Namibia, at around six on a Sunday night.

I’d rented a flat and moved my backpack in the next morning. It was a third-story walk-up. Apparently this makes it hard to rent. I got it cheap. Three stories is nothing to an ex-New Yorker.

I hadn’t even unpacked before I was back on my tour of African hospitals.

It was after-hours, so I was admitted through “casualty.” That’s the emergency room to us Yanks. I’d gone to the private hospital in a taxi and all I could think was how desperate I’d be if I was in Murchison Falls, five hours from Kampala. Herr Marlboro would have had to figure out something clever using his “Where There Is No Doctor” book and the saliva of a hippo.

A sympathetic German nurse admitted me and took my details. A South African doctor asked me a lot of questions. They both thought it odd that my emergency contact was four countries away and had a German name. I knew no one in Namibia.

The doctor gave me some pink pills and strict orders to lie in bed for two days before visiting him in his office. This visit cost me about $47. Everything in southern Africa is much more expensive than in Uganda.

The rest of the week, I was bored out of my skull and getting very tired of the view of the opposing wall across the courtyard outside my bedroom window. Family and friends called a few times but I wished I knew someone who could bring me food. Instead I flaunted doctor’s orders a few times and gingerly walked to the supermarket.

On Friday, I had to search for the doctor. His office was on Breite Strasse and Kaiser Wilhem. Only problem was that someone had renamed the German streets with Namibian names. My guidebook had an old map, and that is how I learned that my new flat was on Bruecken Strasse, no Libertina Amathila.

The doctor had forgotten who I was, but after a reminder, he gave me a clean bill of health. Almost clean. I was to take it easy for a while and he wanted me to come back for a “procedure.” No thanks. I’ve had enough medical attention in Africa to last me forever.

Over the weekend, I wandered past Konditoreis, Fleisch Markts, the Brauhaus, the Bahnhof, and assorted Kirches. I could buy eight different kinds of wurst, locally brewed beer, broetchen, or a stewed pig knuckle. The beach offered a respite from the constant barrage of German signs.

On Sunday, desperate to get out of the house after a “classic Fantastic Four” coloring marathon, I decided to go for lunch in a restaurant. Maybe I’d try the pig’s knuckle.

But on Sunday, everything in Swakopmund is closed.

“Just like Germany,” I thought. “Well, except for that African woman walking down the street with the basket on her head.”
Posted by Marie Javins at 4:58 AM