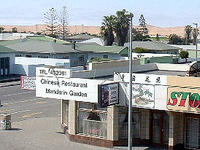 I felt guilty as I threw away the can my pasta sauce came in.

“Someone in Uganda needs this can,” I thought.

But I wasn’t in Uganda. I was in Namibia, in the south of Africa, where people use store-bought items and not makeshift cans that can fashioned into lamps or containers. In Namibia, you can just pop down to Pic’n’Pay and buy all the cans you want. At least in the Germanic tourist destination of Swakopmund you can.

I’d arrived on a hot minibus the night before and rented an apartment after a night in the Desert Sky Backpackers Lodge. The minibus pulled a trailer and was mechanically sound; other than that the only difference between a Ugandan minibus and a Namibian minibus was that the passengers bought snacks at the gas station mini-mart instead of from a kid shoving meat-on-a-stick through the window. And the soundtrack had changed. In Uganda, I’d usually hear sickeningly sweet ballads about Jesus. In Namibia, I heard a rap artist accusing America of coming to Africa with a bible in one hand and a gun in the other.

The Desert Sky Backpackers, like the Chameleon Backpackers I’d stayed at in Windhoek the night before, was homey and cheap and private. I’d had a single room with shared bath in each and each had cost $20. In Swakopmund, I’d unpacked and headed straight to the laundromat, which I’d been daydreaming about for months.

I’d last been in the Swakopmund Laundromat in 2001, when Shawn—the group leader for my Crazy Kudu safari—had actually thrown in my laundry with his own. I’d felt a little funny that Shawn was washing my underwear, especially since we had a little flirty thing going at the the time, but he rightly pointed out that he’d been doing his laundry anyway.

In 2001, the strange little Germanic seaside town of Swakopmund had charmed me with its slice-of-Europe mixed with African culture. In 2005, its prices threw me into a panic.

Swakopmund had thrived while I’d been elsewhere and prices of food, real estate, and anything touristy had skyrocketed. I paid more in restaurants than I did in New York, so I was quite happy to take the keys to my new apartment that featured a fully equipped kitchen. I immediately stocked it with decaf coffee (I’d managed to quit caffeine during my food poisoning bout) and sweet chili sauce.

I was homesick for Uganda, for H.M., and for hippos. What had I seen in this clean resort town where everything worked, where soda came in plastic instead of in returnable glass bottles? Now I knew exactly what Luc, H.M.’s French-Bavarian friend who’d visited us, meant when he’d pined for Uganda upon his return to Munich.

Or maybe Swakopmund wasn’t the same without Shawn showing me the town. Maybe I’d get some real work done for a change. I ate my pasta at my laptop and admired the setting sun that went down over the Chinese restaurant across the street. And beyond were the dunes, and beyond that, the Atlantic Ocean. It wasn’t a warthog, and it wasn’t a hippo flicking shit on the walls of my home, but it would have to do.
Posted by Marie Javins at 8:24 AM