The World on Paper 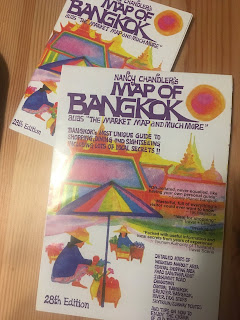 I just bought my last-ever copy of the final paper edition of the classic Nancy Chandler map of Bangkok, first published in 1974.

I bought my first one in the year 2000, and wore it out over several years, scouring its tiny details with my much-younger eyes, planning my destinations and routes along canals and alleys. The Skytrain was a mere infant the first time I stumbled over it, a few stops not even on the map when I looked up in central Bangkok and said OH WHAT'S THAT, followed by "If I took the river taxi to Saphin Taksin, I could pick up the Skytrain there," which forever changed how I got around Bangkok.

I had a few more versions, my last one in early 2013 I think, when I stopped by BKK in search of ceramic zebras on my way back from Burma. I also bought a PDF of this map, so in truth, I'll probably never use this paper version as intended.

I think I'll frame it and put it on my wall. I love a good map, and this one makes me nostalgic for a way of traveling almost no one does anymore. Indulge me for just a moment...there was a time when I stopped halfway though MariesWorldTour 2001, set up shop in Berlin for a month, spread out two maps of Africa on the rental apartment's floor, and that's how I planned alongside some Bradt and Lonely Planet guidebooks.

That world is gone now, and I'd never purposefully choose it over having a world of information in my pocket. In this case, tech makes my journeys so much easier. But no tech can increase the level of comfort on a pocked dirt road in a truck filled with chickens and goats. Don't worry, still plenty of adventure to go around. 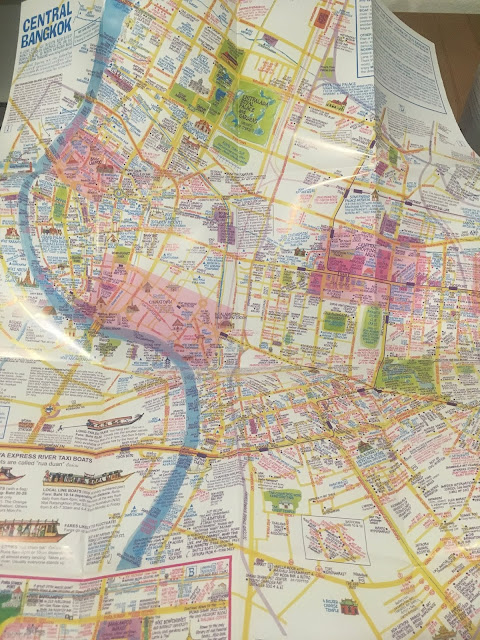 Categories: Bangkok, Travels with Myself

I have a couple of maps that need to be replaced sometime soon.