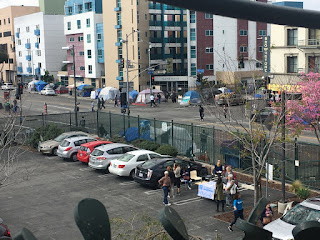 Just before 9 this morning, I caught the #222 bus over the hill from Burbank to the Red Line in Hollywood. I arrived in DTLA by 9:30, much too early for my 10:30 a.m. tour honoring Women's History Month.

I walked rather than bussed it across downtown, stopping to look at things along the way, seeing what has closed and opened recently. It's funny how many places have changed hands more than once since I stayed on 4th and Main my first year out here.

My phone map directed me straight through Skid Row, past tents, men hanging out in parks, and two huge missions. The first few times I came through here, I was completely shocked, but I've since sat through talks by homeless people who explained their lives on the streets, so the vast number of homeless seems less unsettling to me than it was, though I always feel guilty and ashamed for wandering through on a frivolous field trip.

My first LA Conservancy tour of the day was of Downtown Women's Center, a women-only shelter housing 71 women and providing day services to any woman who walks in and requests them. I was there with a few hundred other tourists, almost all white women in their sixties and seventies. I worried this would seem like poverty tourism, but everyone was respectful. Plus, when we walked in, a raucous bingo game was going on in the cafeteria, so it was easier than I'd expected to get in the spirit of things.

The building that houses the center was built by one of LA's historic two famous women architects, Florence Casler (the other being Julia Morgan). There's a cafe on the ground floor where women learn to run it and interact with the neighbors from the million dollar condos across the alley. I didn't make any friends when I asked "Is there a sliding scale for coffee" and was told only the women who worked there were actually interacting with the neighbors, not the day visitors or women residents. The center had a library, job-training facility, computer room, healthcare center, and so on.

And they take donations of camping gear to give to the women who live on the streets, so now I know what to do with the tents I'm earning from my office's Wellness Rewards program. (We gets points for walking. I know that sounds ridiculous. It's a car culture here, you know. Today's walking steps: 15,361.)

Partway through the tour, we met a DWC resident, a 77-year-old named Sophia. She explained to us how many of the residents work and pay sliding scale rent. 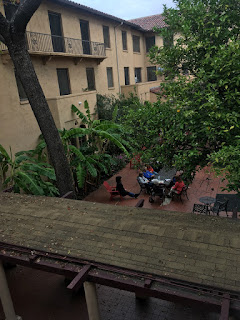 Marilyn Monroe had been the most famous resident—this was a kind of dorm place for aspiring actresses, which my first rental in LA had been as well. There was a curfew and a chaperone, so I guess parents were less weirded out their daughters had gone off to Hollywood to seek their fortunes.

The HSC today houses a digital learning lab for disadvantaged aspiring designers as well as temporary housing for women. The building is a bit worse for wear—in one of its iterations, some architectural changes were made that were a bit unfortunate, but the dorms are intact, mostly.

I was worn out by then, just past 3, so I walked up to Hollywood and Vine and caught the #222 bus back over the mountain to Burbank. 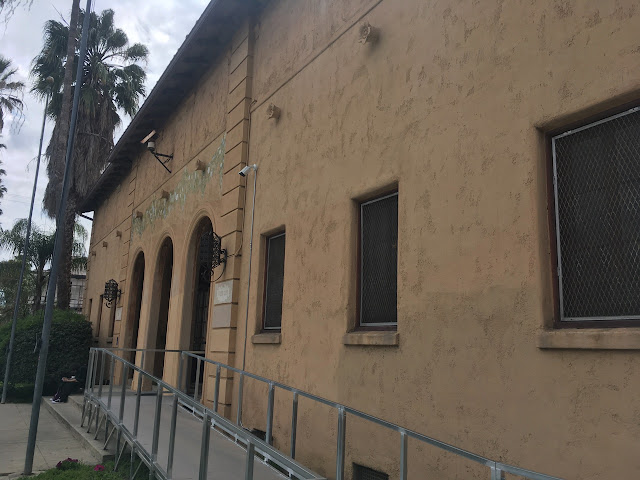