I've been hunting for a sofa for my Burbank condo for some time now.

They're all too big, too fluffy, too overstuffed, too ugly, too expensive...mostly just too big. The place I bought in Burbank is compact, and I need my desk to be by the window, which takes up about a third of what space one would normally have for a couch. I have to have light next to my desk, so I can look outside when working. Also good for fighting off glare, which is the byproduct of insisting on sitting in natural light.

I went to IKEA, to Bulkea, to Cost Plus, to all kinds of online sites, to every sofa and furniture store across LA. Maybe not. Maybe it just felt like it. I became an expert in understanding what people want...and in knowing that's not really what I wanted. I wasn't even sure I wanted a sofa. Isn't that just another thing to carry around? I try not to accumulate. It's just more to get rid of later.


I finally narrowed it down to a take-apart sofa that showed up in boxes in the mail, a cheap disposable option from Cost Plus, and a few adequate options from West Elm or maybe it was Crate and Barrel. I forget. But I was reluctant to pull the trigger. Would I even sit on the sofa? I had one in JC and I fell asleep on it once between 2008 and 2013. I sat on it maybe 25 times, max. Mostly it was used by houseguests, which I try to discourage.

Then one day in late November, I was wandering around the far reaches of DTLA, in the Arts District, and I stumbled over a converted warehouse with a bunch of food trucks. Oh, yay, more food trucks. (That's sarcasm. We get three food trucks a day, five days a week at my place of employment.)

But sprinkled in with the food trucks were some independent vendors. Like this one. 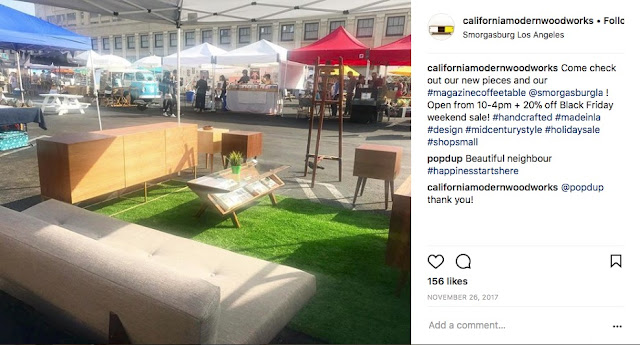 I could work with that little sofa, I thought. It's simple, clean lines, too small for houseguests, and it doesn't look like it ate too much at Thanksgiving.

What about dust? My condo gets a ridiculous amount of dust. I thought it was my proximity to the freeway until I realized everyone I know also complains about dust. It's a desert dressed up in backlots, what can I say?

I kept eyeballing the sofa on its parental website, and asking questions to the person in charge of the furniture company email. Then the holiday sale ended and the price went up!

I wrote and asked if I could have the price from yesterday. Yes, I could. I pulled out my credit card and ordered...

And now we wait. 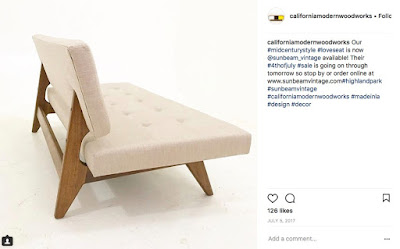 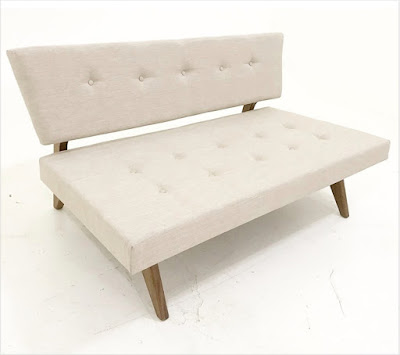