Doorway to the Past 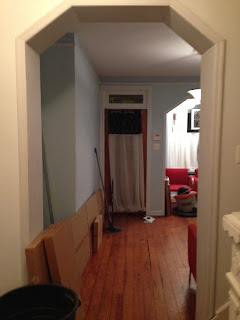 I had been agitating BBF to help me with my old pocket door I'd salvaged from 350 8th Street pretty much since we first met a few years ago. Al H (who did some of the work on my old place) had helped me extract my pocket door, but we were sorely disappointed to learn someone over the preceding century had sliced off a third of it, presumably in order to shove the door back into the cavity and seal off the gusts that came in from behind it. (We stuffed the cavity full of insulation before sealing it up again, but left the 2/3 pocket door in the basement, until I moved, when we then left it in the garage.)

BBF was having none of it.

Where are you going to put an 8x4 pocket door? There's no room for it. And it's missing a third of the wood!

I know exactly where I'd put it. In the cavity of my house that used to have a pocket door, given the worn track on the floor. I'd dismantle the angled semi-arch someone built in the past and restore the pocket door on the edge of the parlor to what it surely was in 1900.

But BBF is the one who would have to help me drive the door back and forth to Dip 'n' Strip and then do the carpentry work, and he doesn't have that old Turbo-style "The more impossible, the more I want to try it" going on, probably because he is not Australian.

He did agree to help me carry it from the garage to my Lafayette house, where he propped it up in the tiny yard. 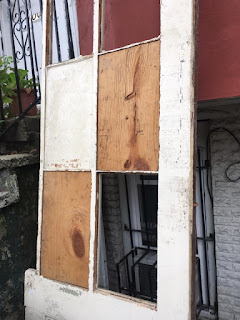 Then it was my problem.

But I also wasn't going to throw out the etched glass that survived 87 years in three of the six glass panels. I had a matching one already from when a neighbor dug it out of his door while restoring. If I had four, maybe I could use them in something eventually. At least, throwing out etched glass from the 1930s seems irresponsible. I was determined to save the glass if I couldn't save the door.

I dug around in my toolbox, eventually finding a chisel, hammer, and a gizmo theoretically used to yank up old caulk. I had that because the tub at Yancey's (my rental on Hamilton Park) had DIY tile around it, leaving all kinds of cavities for mold to grow in. I don't know how many times I recaulked there over the years of renting.

I dug into the ancient glazing putty of the 2/3 pocket door, and once I'd find the glazier's points, each side went smoothly. I managed to remove all three etched glass panes without breaking anything.

We moved the old door to the curb on Sunday night, and the trash collectors took it away. I didn't stay home to watch. I couldn't bear it.