Burbank hosted its annual Bike and Walk to Work Day today. For me, that's just "going to work," but one of the three pit stops was in front of my office building, so I stopped in and browsed the public information tables set up by the police department, fire department, cycle advocacy groups, local hospital, and public transit info center.

I politely took flyers about buses I already know well, entered the drawing for a folding bike, and got some good swag--a little light clip for bike handlebars and a flashing reflector.

Then, at the far end of the gallery of tents, I saw a row of used bicycles.

A local nonprofit called Burbank Bike Angels had set these bikes up, and was accepting donations in exchange for them.

There's a bike parking area in my new building's parking garage, but I'd barely ever ridden the last bike I'd had and was unlikely to ride one here. There aren't many bike lanes and this is car country.

"How much are the bikes?" I asked.

"Whatever you donate," was the response.

I took a flyer and went upstairs, where I spoke to one of the other group editors who had bought a bike six months ago and then never used it.

"That's exactly what would happen to me," I said.

But about five minutes later, I changed my mind, went downstairs, and gave the sixty dollars I had in my pocket over in exchange for a purple Schwinn.

I parked it on the bike rack in the office garage, and it was still there at the end of the day. Only now it had a note admonishing me to buy a lock. Ha. Okay. Thanks, anonymous person.

I rode the bike home at twilight down back streets, balancing on my inappropriately tall clogs while trying to stop my handbag from sliding down onto the handlebars.

Here is Red the purple bike, currently residing in my living room while awaiting a lock. I don't know how long I'll manage to keep this until it is stolen even WITH a lock, but at least I know where to get a new one for cheap. 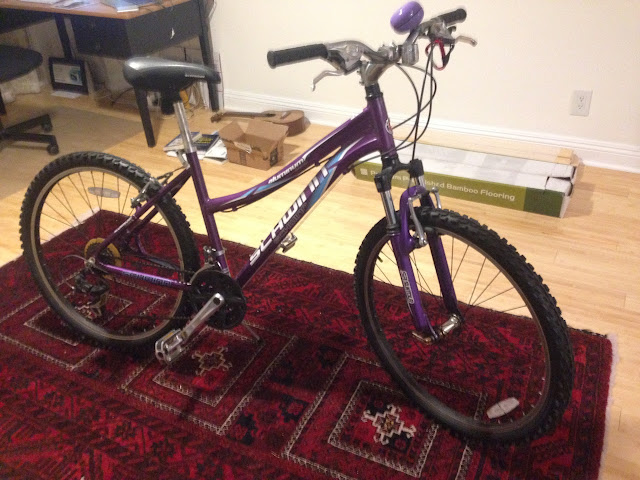