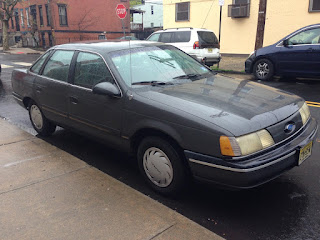 My car, Henry the Ford Taurus (1990), was running perfectly on the 15th anniversary of my acquisition of him.

I picked him up from my Jersey City garage late last night, directly from Newark Airport. I cleaned out my stuff this morning. Rocks Turbo dragged up from the bottom of canyons as we drove across the US in 2002. An old Haynes manual. The peace sign air freshener my sister left in the car in...2004? 2005? My E-Z Pass. Half a wooden kookaburra keychain. Fuzzy dice.

My car was waiting on Mr. Recycler to come and take him away to be smashed into steel. People said "Why don't you give him to someone," but it's worrying to hand off a 27-year-old car. Who would trust it? Others said "Why don't you donate it?" But you can only get Blue Book value on the donation, not even enough to worry about. The rear bumper alone could be sold for twice what the car is worth. Whatever...I didn't have time to fuss around, so I sold it outright to a recycling company.

I've had this car since April 23, 2002, and I bought it because it's a Taurus and I'm a Taurus, and buying a used car is such a crapshoot, you may as well use the zodiac.

The Aussie ex and I drove this car from Torrance to the East Village, and I've had it ever since. Henry the Ford stayed in my garage while I was in Kuwait, Egypt, Australia, Uganda, and spending ten months on the bus around the world. He went tent camping all over the US and visited every campground in NJ and VA for two separate books. I'd slept in the backseat a few times when I'd gotten too tired to keep driving.

I almost called the recycling company to cancel about 20 times. My car represents eras of my life. But then I'd remind myself that NJ insurance is $150 a month, and that's money I am spending to garage my car in Jersey City even though I live in California at the moment. I'd thought I'd drive it to LA, but after 23 months of living car-free, I knew I didn't need to spend a week driving 8-10 hours a day to get the car out West.

I felt guilty as hell for recycling him, and I kept reminding myself this is a hunk of steel, not a living being. But I didn't entirely believe it. 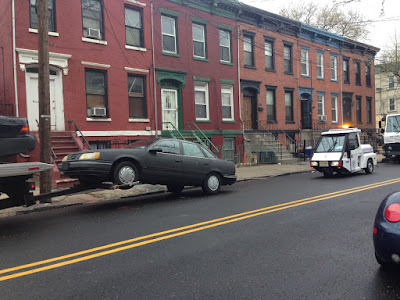