When I bought my house back in May, I thought Well, the kitchen is okay. It's fine for now. But then the more I looked at it, the more I hated it. When I'd moved into my last condo, I'd changed the knobs and that had made the kitchen okay for a while. But this wasn't okay. The kickplate was warped and deteriorated. The doors were grimy, the hinges loose on some. Everything was permanently filthy, and scrubbing improved this, but everything was still kind of disgusting. And like in so many Jersey City older kitchens, there was a giant refrigerator dominating the room.

I asked Best Boy Friend if we could change the kitchen. He warned me not to—kitchens are expensive. And so I thought, okay, we'll leave it. That lasted a few months. I got the oven repaired, asked MK to use the hair dryer to pull out the gross old contact paper and paint the worst offending door.

It was less gross, but still gross.

A few months later, I tried again "What if I just changed this and didn't move any plumbing?" 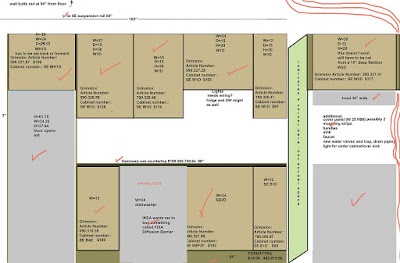 BBF said okay. It could maybe happen without spending a fortune. (He's a professional Jersey City contractor, builds kitchens and stuff for a living. I swear I did not set out to find a BBF who was excellent at kitchens. It just worked out that way.)

I made a plan. I sent it to BBF, who is back home in JC while I am in Burbank for work.

He told me what I'd done wrong, and I tried again. We went back and forth a few times, and ultimately, I almost got it right, but had to fix it one last time to account for the door swing on the new refrigerator I got to replace the behemoth. It ended up something like this diagram, but not exactly. For one thing, I had to return the plinth. It was made of cheap plastic. I asked the IKEA people why they'd stopped making the kickplates from laminate, and they said too many people were warping them by getting them wet. That makes sense, but I never did that to the one I'd fashioned out of a cover panel at my last apartment, so BBF was right when he said "Take it back and I'll just make one." He also makes his own bases for the cabinets instead of using the plastic legs. (Like I said, he's excellent at this stuff.)

I also had to return two 15" cabinets and get 12" replacements to account for the aforementioned fridge door swing. Returning and purchasing new cabinets at IKEA over the holiday was stressful, and we made it through without me losing my mind! I narrowly avoided a meatball and lingonberry meltdown.

I'm back in LA now, and I don't have photos yet of the finished kitchen. The new backsplash of mini-subway tiles is going in today. I'm not sure when MK plans to paint.

Here is how the progress went: 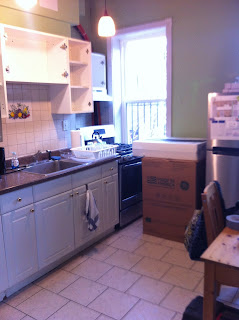 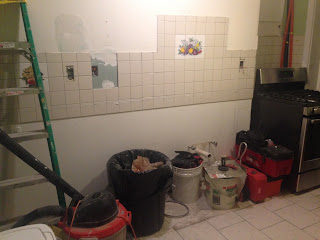 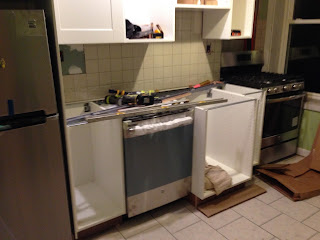 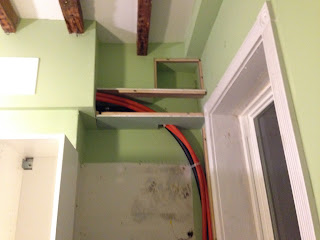 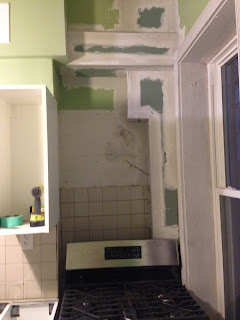 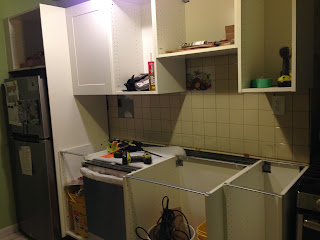 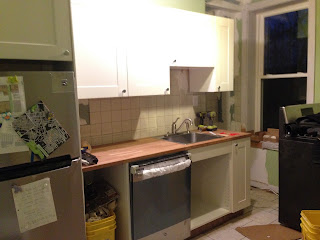 Besides the old refrigerator, which didn't fit out the front door and involved a grinder, here's what we had to figure out how to get rid of: 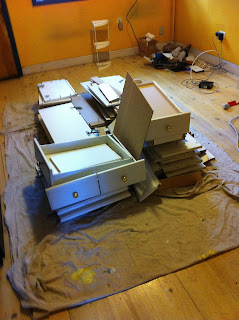 Anyone need a pile of filthy laminate? It's free.
Posted by Marie Javins at 3:11 PM