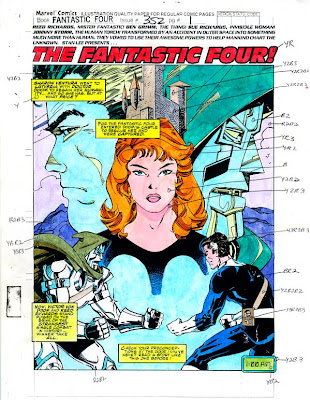 In one of my past identities, I colored comics.

Attached is page one of the first big assignment I ever got. I had this out of its binder to show my class on Tuesday, so I scanned it in.

The year was 1991, and I had no idea what I was doing. My friend Steve Buccellato was a successful colorist, though, and while I did the physical act of coloring this book, he told me exactly what to do.

Proxy-coloring seems odd to me now, but with Steve walking me through this issue (he penciled in the codes on the paper, and I mixed the colors and painted them onto the page), I gained the confidence to do the next issue by myself. And the next, and the next, until I'd colored comic books for four years. In 1995, we slowly moved into using this newfangled software called Photoshop, but the transition from old-school to total digital coloring took more than five more years.

Before Photoshop, the colorist painted a guide like this one. We used transparent watercolor dyes, which had the benefit of only showing up on the white areas of the page. Digitally, it's like saving the artwork into an alpha channel or different layer, so you can see it but won't color over it by accident.

Another person would cut a screen of Rubylith—a colored semi-transparent screen—to match the shape, and would adhere it to the master film.

Now, of course, I outline a polygon with my lasso and hit fill to get the same effect. Times have changed.
Posted by Marie Javins at 8:32 AM